Franklin and Forester quotes, in a Dutch context

I’ve just got back from the Netherlands. I rode a bike there for two weeks and experienced for myself why so many people there use bikes every day, and why transatlantic comedy duo “The Two Johnnies” are wrong to oppose mass bike riding in the UK and US. Here’s some opening thoughts: photos of real, everyday scenes which show the rhetoric of Forester and Franklin to be ridiculous.

Yeah, go on girls – follow Forester’s advice and get on that road, you’ll be fine as long as you ride your bike like you’re driving a car.

Oh, those poor children suffering the terrible consequences of the Dutch cycling infrastructure! 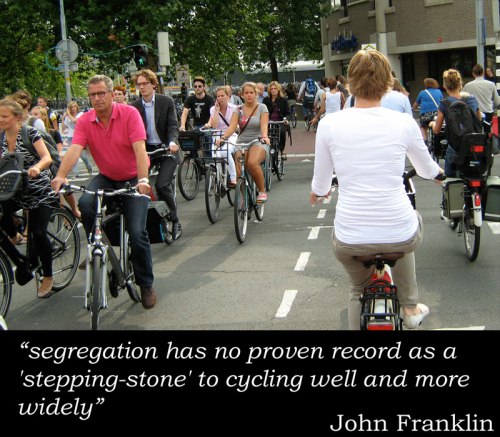 He’s right, this scene is a figment of your imagination. If you go to Utrecht during rush hour you will see nobody cycling on the bike paths. They’re all just for show, like North Korea.

This guy rides his racing bike slowly, the Lycra is purely for sexual reasons.

The system is so stacked against these guys, can’t you see the upset and stress the restrictive cycle paths are causing here? 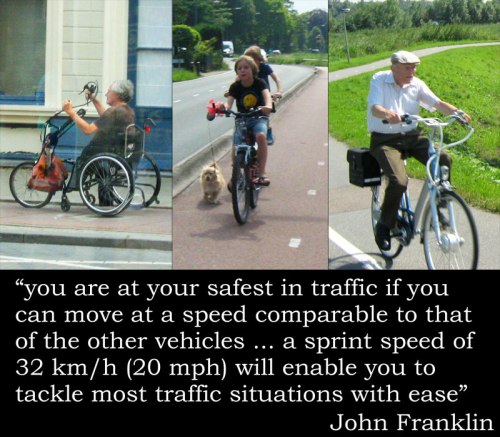 I’m sure these guys can manage that 20mph sprint speed (especially the dog). If not then they shouldn’t be allowed out cycling! It’s a tough sport for serious men like John Franklin!

I was going to include more quotes from John Forester, but to read his deranged ramblings requires more resolve than I have right now.

Again, some people (mainly on Twitter) are misunderstanding what I’m doing here: Vehicular Cycling is a good coping strategy for fit, confident people to ride on hostile, motor-dominated roads. Opposition to Dutch-style infrastructure is what I’m attacking, and that’s quite a separate thing.

I didn’t have to search far and wide for these quotes — both Johns are clearly against mass cycling — and only the final one is from any Vehicular Cycling instructional material (it’s from John Franklin’s book about VC, Cyclecraft — though the book also contains unnecessary anti-infrastructure dogma too).

All the other Franklin quotes are from this document from 2002, which while I admit isn’t the most current thing available, it’s one of the first documents I came across on his website and is still often quoted by anti-infrastructure people. If Franklin has changed his views since then, he hasn’t done so publicly.

Both the Forester quotes are from this document which is of similar vintage, though again Forester doesn’t seem to have changed his opinions at all since — or even bothered to visit the Netherlands to see the improvements since the 1930s. I’m sure he’d find that a lot has gone on since then.

(The Forester document is an article attacking an academic paper which recommended Dutch-style infrastructure. One of the authors of the paper, John Pucher, replied to Forester: “I strongly oppose this ELITIST view of cycling, and think that many policies should be implemented to encourage bicycling by everyone, young and old, rich and poor, men and women, children and grandparents, students and businessmen, etc. Forester’s policies would guarantee that cycling remains a marginal mode here in the US.” I think Pucher has been proved correct, and I tip my hat to him here.)

Either way, the age of the quotes doesn’t really matter. Both these guys are still quoted frequently by people who have been hoodwinked into joining the ‘Vehicular Is The Only Way’ club, and they have been shown to have had concrete effects on the roads today. Read any article on the many blogs discussing cycling in the UK and you’ll often see a comment from someone saying that the roads are fine, we just need more training, linking to a Franklin document or quoting him. Who knows how Kings Cross junction would look today had the cycling lobby not been split in this way all those years ago?

So, use vehicular cycling all you want — there’s not much choice in the UK, after all — but don’t let that blind you to the possibilities of bike riding for everyone, which promoting VC as the best and only option has consistently failed to achieve (and obviously cannot achieve, as the final image demonstrates so clearly). There’s only one proven way to reach mass cycling: the Dutch way.

220 responses to “Franklin and Forester quotes, in a Dutch context”