Cyclists, you have a language problem

Don’t worry, MAMILs, I’m not saying that you all have speech impediments! In this post I’m musing on what the English word “cyclist” means. This one word covers such a wide range of concepts, some of which might cause confusion or even hostility towards cycling campaigns, and I think it’s perhaps a toxic word which should be avoided. (If this all sounds a bit airy-fairy to you and you’d prefer to see photos of infrastructure and stuff instead, I can recommend my first ever post.)

What is a motorist?

The word ‘motorist’ is used to describe a person who uses a car for transport.

Equally, it’s not used to describe a bad driver. Like the Eskimoes and their (apocryphal) hundreds of words for snow, we have many ways of describing motorists who break the rules. Boy racer, amber gambler, drunk driver, road-hog, tailgater – these people are never described merely as ‘motorists’ .

So the word ‘motorist’ is used to describe the large and disparate mass of people who drive a car in an acceptable way.

What is a cyclist?

In a recent BBC news item about a sign in a library in Australia, Lance Armstrong was described as a ‘cyclist’. (Okay, as a “disgraced cyclist” but still.) So perhaps the word ‘cyclist’ describes a sports-person who races bikes professionally? Like this guy:

This person is a cyclist, just like you are! (Photo: Tambako the Jaguar)

But then we also have this article from the Eastbourne Herald headlined “Helmet saved my life, says cyclist” about 59 year-old grandmother Linda Groomes, who was hit by a car while she was crossing a road pushing a bike — not riding it but pushing it! (Hat-tip to Mark for that gem of an article.)

So a cyclist is anybody who rides a bike at some point in their life? Hmm. Seems a bit broad that, especially as Linda Groomes may well also drive a car, which she was also not doing at the time of the collision, yet they didn’t call her a ‘motorist’. I assume she was wearing a coat, but she wasn’t described as a ‘coat-wearer’ either. How often must one ride a bike to be a ‘cyclist’? Once a week? Once a month? Once a year?

So both Lance Armstrong and Linda Groomes were described as a ‘cyclist’ despite using their machines for very different purposes.

Well, Linda always wore high-visibility clothing and a cycle helmet, so maybe ‘cyclist’ means anyone who rides a bike seriously or responsibly? Like this woman: 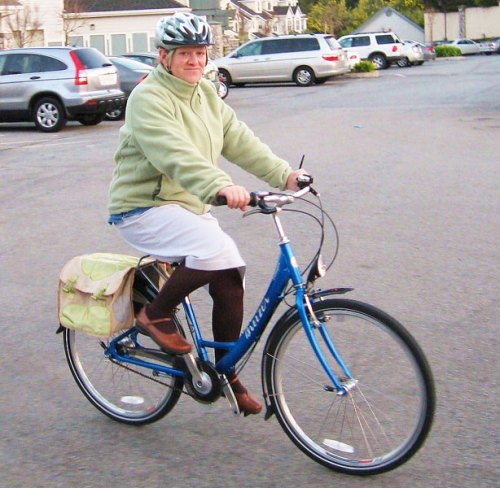 This person is also a cyclist, just like you are! (Photo: Richard Masoner)

But wait! What’s this? Plain clothes cops in Cambridge target cyclists riding through red lights or on pavements, and Hundreds fined as police launch crackdown on pavement cyclists.

Also Plea to new police commissioner to tackle problem cyclists, and if you’re still not convinced, Police warning over cyclists who ride at night without lights.

So ‘cyclist’ is also used to describe people who rides a bike aggressively or irresponsibly? Like these guys: 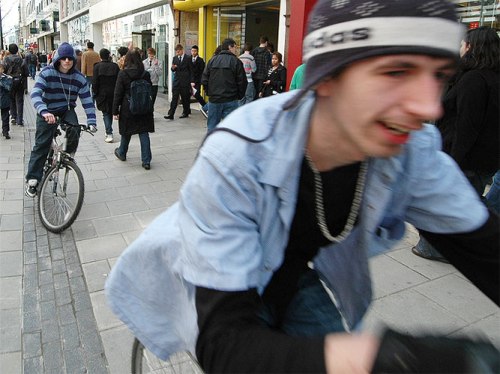 These two young men are cyclists too, just like you are! (Photo: Pete Boyd)

So, a ‘cyclist’ is a person who rides a bike sometimes — anyone at all, whether they’re riding it or not, whether they’re a professional sportsperson or a middle-aged grandmother or a youthful scofflaw — that is a cyclist. That’s a pretty broad brush if you ask me.

This causes a problem, as English doesn’t have an alternative word to be used for people who use a bike responsibly. This is very nicely demonstrated by an article in the Cambridge News which features this quote, which is so good I’m going to present it to you in burgundy, with a large, bold typeface:

“I am now anti-cyclist, even though I am a cyclist.”

Note that the headline is “bike crash victim hits out at cyclists” – at cyclists. As the word covers people who ride a bike for sport, and people who use a bike responsibly and considerately, she is surely hitting out at all of them. Even you!

It doesn’t say she’s anti-bad-cycling, or anti-pavement-cycling, nor is the government blamed for failing to provide better infrastructure for bikes which would massively reduce pavement cycling. She blames all cyclists – even though she claims to be one herself. (And never mind all the people who are killed or injured every year by human beings using larger, heavier machines to move at speed when they should stop instead.)

I’m not having a go at her for being understandably upset about what happened to her (ignoring a stop signal and causing injury to someone is unacceptable, whatever the vehicle) but she’s fallen into the trap of blaming a whole group of people for the sins of a few. (She also goes on to say that it’s not “local cyclists” but “foreign students” who are guilty – people from other countries are another good out-group to blame if you’re angry and confused and don’t understand the issues fully.)

You cyclists are all the same

I’m reminded of a helmet-cam video (which I can’t find now) where the driver of a 4×4 cuts up the cyclist who is filming, and at the next red light the cyclist asks the driver to explain himself. The driver says something like “you bloody cyclists, I’m sick of you, always speeding around Richmond Park,” to which the cyclist replies “but I’ve never even been to Richmond Park!” It doesn’t matter though, says the driver “you cyclists are all the same.” 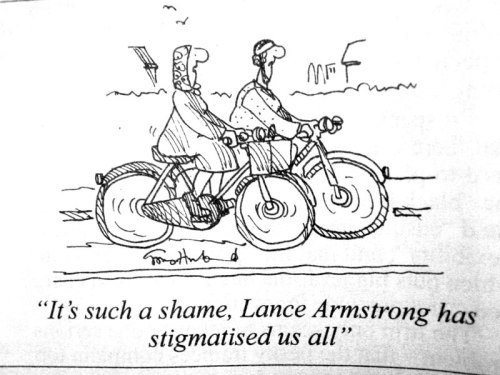 A photo of a cartoon in the current issue of Private Eye, Britain’s leading satire magazine, read the news months before the papers get to it, available in all good and some bad newsagents, a bargain at £1.50, why not subscribe it’s even cheaper then, please don’t take me to court! The current issue has at least one more Lance Armstrong joke, maybe two, so go buy it.

(To go off on a tangent for a moment, I once read an article about Apple’s tight regulation of its App Store and someone had left a comment accusing Apple of being “socialist”. To me that sounded odd – Apple are definitely a very capitalistic corporation! What was meant was “Stalinist” as in the tight, unquestioning control which a powerful overlord might exert, but in the USA both words are synonyms. Marx has lost control of the word ‘socialist’, and it now means bad things whether he wanted it to or not.)

I would recommend that cycling campaigners – and, indeed, US socialists – to avoid the word wherever possible.

Myself, I never identified as a cyclist anyway, mainly because it refers to enthusiasts and scofflaws. (Although I know that all those “cyclists dismount” signs are aimed at me when I’m riding a bike…)

I’m just somebody who uses a bike. A bike user. I use a bike for transport. That doesn’t make me one of those cyclists!

Example 1.
Q: “So you’re a cyclist, like Lance Armstrong.”
A: “No, I’m not really interested in sport. I just use a bike to get to work.”

Example 2.
Q: “So you’re a cyclist, a professional sportsperson who competes in bike races?”
A: “No, I’m Lance Armstrong. I just use a bike to get to my pharmacist.”

It doesn’t always work, but there is usually a way to avoid saying ‘cyclist’. I also like ‘person on a bike’ which although it’s more cumbersome than ‘cyclist’ as I don’t think it has quite the same negative connotations.

Maybe we could invent a new word – ‘cycler’ for example – which could be used to describe somebody who uses a bike casually. (I always think the ‘-ist’ ending makes any word sound like it’s describing a specialist.)

Cycling is not just for cyclists

Another problem with the word “cyclist” is that it is any new measures designed to improve conditions for riding a bike are said to be “for cyclists” or “to benefit cyclists”.

Even some of cycling’s most prominent ambassadors do this. (I’m not having a go at anyone here, this is constructive criticism, I love you all dearly!)

“Boris Johnson urged to double spending on cyclists” – The Times

Wikipedia describes LCC as “lobbying for better conditions for cyclists in London.” (LCC itself seems quite cautious about the word.)

And just so nobody thinks I’ve gone soft on Scotland since last week, here’s STV describing Pedal on Parliament: “Their hopes were simply to remember those who lost their lives on Scotland’s roads and to call for more provision for the nation’s cyclists.”

The problem with phrases like these is that they suggest that people who aren’t ‘cyclists’ won’t benefit from any of this stuff – and that’s a hell of a lot of people who will think they are being left out.

As everyone reading this blog will already know, improvements to our roads and streets will benefit children, parents, students, workers, the elderly, people with disabilities – these changes will make the country better for everyone, not just the irrationally hated, disparate minority of people collectively (and hopefully formerly) known as ‘cyclists’.

I also have my doubts about ‘segregation’ and ‘segregated’ used to describe a cycle path protected from motor-vehicles. It definitely carries negative connotations in the USA – very negative, I’d be surprised if it’s used there at all – and even though the UK never had the racial segregation like the USA or South Africa did, I think there’s still some stigma attached to the word. Perhaps separation/separated and protection/protected are better, more positive-sounding alternatives?

Update: In the comments, dedicated has been suggested too. I’ve heard this before, and it’s a good word which is probably better at getting the speedy commuters on board than ‘separated’. In the USA they also use ‘buffered’ to refer to a specific type of cycle lane which has a painted buffer between the bikes and the cars.

Also, while it lasts, check out this bit about the Lance Armstrong scandal on Charlie Brooker’s Weekly Wipe – “the news asked anybody on or near a bicycle about it“, because everybody who rides a bike is into sports cycling, right?

After publishing this article, I was looking at my stats and saw a link from a similar article on a cycling website in New Zealand — it turns out someone down under was having the same thoughts as me, albeit a couple of weeks earlier!