London’s Super Danger Junction: A lesson in why cycle campaigners must demand the best

When Transport for London finished their new cycleway between Bow roundabout and Stratford two years ago, I was excited to go see it. I’d already seen photos of this apparently “truly super” cycleway, and it looked promising.

I’d also seen TfL’s video explaining how to turn right by turning left three times, crossing a footway, and waiting in an ASL, so I knew that it wouldn’t be perfect.

But nothing prepared me for how badly-designed the junctions were. I stood there stupefied. The cycle infrastructure stopped short of the junctions, meaning that they’re no better than any other junction in London. There’s only paint and crossed fingers to protect people on bikes from turning vehicles.

This is not a well-designed cycleway. This is merely a painted cycle lane, proven to be dangerous.

In particular, I focussed on the junction with Warton Road as an example of a particularly dangerous design. Charlie Lloyd and Mike Cavenett also pinpointed this junction in an article for the LCC. For some reason, the cycleway has been reduced in length since these articles were written, and it now ends even further back at this junction. 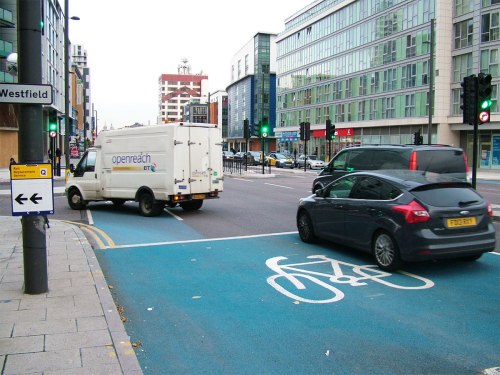 Unsegregated junctions: proven to be dangerous

And the results are in

So it was no surprise to me when the junction of Stratford High Street and Warton Road was named as the most dangerous in Britain.

It is with no joy that I write this article. It gives me very little pleasure to say “I told you so” – I’d much rather TfL had built a proper Dutch junction, proven to be safe. But instead a death trap was built, and people are now injured.

How was this missed by road safety auditors but picked up on by an enthusiastic amateur like me? How could TfL’s army of well-paid engineers draw such dangerous rubbish? I’m glad that TfL are finally installing cycleways, but their implementation still needs to improve. (The newest stuff is better than this section of CS2, but still has flaws which require criticism.)

Cycle infra must be done properly. Cycle campaigners should not be afraid to point out mistakes. Criticising dangerous design and suggesting improvements is not a negative thing to do. In fact it’s a very positive thing to do – it’s what brought about the London authorities’ willingness to consider cycling at all.

Sadly cycle campaigning has a history of applauding half-baked concepts, or even complete rubbish (here in Berlin local cycle campaigners recently wrote a eulogy to 1.3m-wide painted lanes on a brand-new main road).

By all means praise good design, and say thanks when space is claimed for cycling. But that doesn’t mean we must never criticise. Everything isn’t either perfect or dreadful, most things are usually somewhere in-between.

I can accept compromises, but there must be a level of quality below which we will not fall. We’re still being offered paint-only junctions on busy roads in London, and they’re still being praised by people who should know better, so it seems the message still isn’t getting through everywhere.

This design is way over my red line of unacceptable infrastructure. The entire brown area will be just painted lanes, no physical separation.

I hope cycle campaigners can at least learn from this, and make sure that they have minimum standards which are good enough. It doesn’t mean that rubbish will never be installed, of course, but it will at least mean we have firmer ground for making requests for better infra in future.