Cyclists, you have an image problem

Note: This piece is about how cycle campaigners present themselves, and therefore cycling, to the media and the public. Maybe that’s not clear, or maybe people comment without reading the article, but I don’t want to hear about your daily commute in the dark from Land’s End to John O’Groats.

Also, there are comments from people behind Pedal on Parliament and LCC’s Big Ride, and David Brennan (AKA Magnatom, and one of the organisers of Pedal on Parliament) has written a post with his thoughts on this, all of which are well worth reading. I was never having a go at these events themselves as they’re both great things – PoP is especially impressive, 3000 people on their first ever rally – I was merely using them as examples. See my second footnote for more.

The vast majority of British people never touch a bike from one year to the next. They know nothing about riding a bike except what they hear from the mass media, and the general anti-cycling background noise of the UK.

So what do you think goes through their mind when they see coverage of bike campaign rallies such as Pedal on Parliament or London Cycling Campaign’s Big Ride? 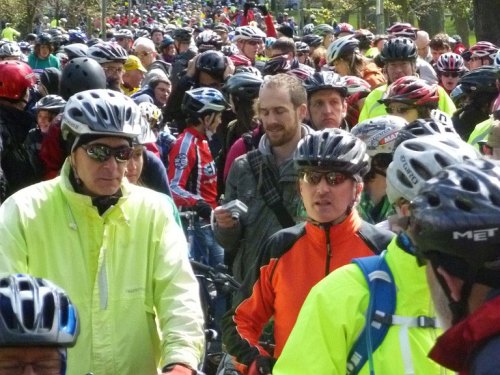 Both rallies were a sea of helmets, high-vis, and Lycra. (Are those men wearing special cycling sunglasses too? Those do exist, right?)

Why would anybody choose to wear these garments while riding slowly along a closed route which is free of motor traffic? It sends out completely the wrong message. It says that if you’re thinking about joining The Cyclist Gang then you need to go and buy special equipment from a specialist shop. It says that you always need to carry a helmet and a tabard around with you, and maybe some special gloves and funny glasses. It says sweat and fear. It just smells wrong.

Look at the bottom photo, from Pedal on Parliament. The guy holding the camera in the middle of the photo stands out like a sore thumb, a lone bike user in a crowd of cyclists. (Lookin’ good, whoever you are!)

Events like these are a great opportunity to show the public what casual, stress-free bike riding for all could look like, but instead they perpetuate the stereotype of cycling as requiring special equipment and preparation. Maybe UK cyclists are just so conditioned to the dreadful conditions on our roads that they forget they’re wearing a helmet and hi-vis, even while taking part in a traffic-free rally calling for a system which would make these items unnecessary.

If we’re trying to send out the message that riding a bike is for anybody and everybody, this isn’t the way to do it. All that special equipment just reinforces the common view of “the cyclists” – a homogenous out-group, a cliquey club for wormelow tumps, a strange day-glo religious sect. By dressing this way cycling campaigners are falling into the trap of the stereotype, and the newspaper reader thinks “look, here’s some of that crazy Cyclist Gang, now they want more money for their weird hobby!”

Wearing these clothes also backs up the belief that they are essential, and anyone riding a bike without all this safety equipment is wrong to do so. Every time there’s an article in a newspaper about cycling it will be accompanied by a photo of people with hi-vis and helmets, and this becomes normal and expected. Therefore anybody riding a bike without a helmet and while dressed in their normal clothes becomes unusual and questionable, and in the event of a collision “they’ll only have themselves to blame.”

I’m not saying that everyone should dress like they’re attending a job interview, but do cycling campaigners really have to dress so outlandishly? Can’t we just wear our normal clothes to demonstrate that riding a bike doesn’t have to be a dangerous chore or an extreme sport?

For me, one of the beautiful things about the bike is that you can just unlock it, hop on it, and off you go. But all this special gear suggests that riding a bike is an inherently dangerous activity for which you’ll have to spend time getting dressed up for. Using a bike should be an easy transport option for everyone, and if it involves all this extra hassle then people will choose to jump in the car instead, without stopping to don any special safety-wear.

Maybe cyclists enjoy the smell of a nylon tabard? Maybe there’s a sexy thrill to pulling on that skin-tight lycra? Maybe the helmet gives them special superhuman powers? I’ve no idea, as I’ve never worn any of those items.

Don’t get me wrong – I’m not having a go at the good people behind PoP or the Big Ride. These events show the wide level of support and push the agenda to those people in power. (Whether they work or not is another matter…) I know that the organisers can’t dictate what attendees wear, but maybe they could request people to wear their normal clothes? Maybe promote it as a themed rally – the theme being to dress like a non-cyclist! [Update: It turns out that LCC did – see Mike Cavenett’s comment below]

This is what Going Dutch looks like – people riding bikes for transport while wearing everyday clothing:

Why not dress up as one of these people?

So the next time you go to a bike rally, even if you’ve ridden 30 miles in your Cyclist Gang costume to get there, do us all a favour and put the high-vis and the helmet in your bag before the cameras start rolling.

(And to those of you who attend these events in your everyday clothes, I salute you!)

Footnote, added 21:14, 23rd January 2013: I’m pretty sceptical about the ‘bad weather’ excuse for all the hi-vis on the Big Ride. I suspect that even had it been warm and sunny, there would have been just as many people in safety-wear.

It’s dry and mild – plenty of people in shirts and jumpers – and according to this weather site the temperature was in the teens.

The second photo – five adults not even riding bikes, just standing there – has three helmets, one tabard, and 1.5 pairs of fluorescent cycle clips. (Although it looks like Caroline Pidgeon may have stashed a tabard in the basket, and kudos to the mother with toddlers in the bakfiets!)

I know the LCC tried to counter this image on the Big Ride, so this isn’t criticism of LCC or any other campaigns, but of cycle campaigners generally.

Everybody is free to wear whatever they want. It’s no skin off my nose if you dress up like a Christmas tree, but you’ll have to accept that it’s a very unappealing image to the eyes of the majority, non-cycling public.

Footnote, added 01:56, 25th January 2013: Also, for clarification, I was using the Big Ride and PoP as examples of a wider phenomena.

Perhaps I should have included these in the article.