Well it wouldn’t really be fair to tell you about the bad bits of Groningen cycling infra without mentioning some of the good bits, would it?

And there really are plenty of good bits. I love living here – in comparison to Berlin and London, Groningen is a dream to cycle in.

As a fairly new arrival here, I find that using the history feature on Google’s mapping software provides an interesting glimpse into the city’s recent past. It’s possible to see how things change over time – some for the better, and some for the worse.

Mostly, however, it’s for the better – the general trajectory in the Netherlands seems to be upwards.

And that’s certainly the case on Sontweg, a fairly large road that heads east out of the city (or west into the city), running past one of those trading parks full of big-box stores like Ikea.

Over the past decade, Sontweg has been through some major changes. Once it was a fairly minor route around the edge of a peninsula, but in the past decade two new bridges have been built*, joining Sontweg up with roads to the north and the east.

Now, we could talk about the wisdom (or lack thereof) of creating new routes for motoring, but one thing I can’t complain about is the cycling infrastructure that’s been built as part of these road upgrades.

Pretty gruesome, eh? Despite all that space, nothing but cruddy old unprotected cycle lanes, despite this being a route for industrial traffic and also the main route into town for the fire brigade’s emergency vehicles. 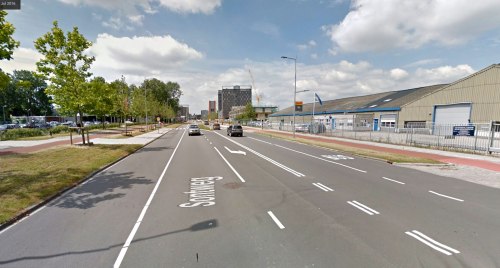 So as you can see, there’s been quite an upgrade.

The main road widening has added a bus lane on each side, and there’s also an intermittent turning lane / crossing island in the middle.

But for me the most important addition is the cycleways, one on each side, surfaced with smooth red asphalt, and set back from the road.

This is how I roll… to Ikea, anyway.

And this is how I roll back again afterwards. It’s an exciting life.

It’s a fine piece of cycling infrastructure. Top marks to whoever was behind this scheme.

My only criticisms (I can’t even go one post, can I?) are that some of the junction mouths on the south-western side should be tightened up, and that the cycleway could be wider. It’s comfortable, but when you’re riding side-by-side with someone, and a third person wants to overtake, it can be a little tight. And there’s plenty of space for a wider cycleway too – it’s strange that it’s not wider, considering Groningen’s claimed modal share you’d expect them to be building for the future.

First world problems, eh! Anyway, I think that a cycling campaigner’s default position should be to always want more space. After years of being squeezed to the sides, cycling needs people who demand more space.

So, there we are – good progress, from bad infrastructure to excellent.

* One of those two new bridges is the one which helped Groningen to lose out on the Cycle City award in 2011, though of course in the UK it would be winning prizes left right and centre. See David Hembrow’s blog posts about it here and here.

For more photos of good cycling infrastructure, I can recommend the Cycling Embassy of Great Britain’s Good Cycling Facility of the Week.