In September 2012 the Department for Transport released a document called Shared Use Routes for Pedestrians and Cyclists. It’s a strange title, as it mainly discusses cycle paths, although it’s careful to only ever call them “shared use” paths. Dutch-style cycle paths which are separated from the road but beside the footpath are bizarrely called “segregated shared use” but the infamous white-line-down-the-middle-of-the-pavement design also shares this name. I suspect this is because cycle tracks don’t legally exist in the UK – they’re either part of the carriageway (AKA the road) or part of the footway (AKA the path).

There are some good points made in the document, including an admission that

“There are many such examples that have been implemented inappropriately and/or poorly designed … It is essential for designers to understand that shared use is not the ‘easy fix’ it might appear to be.”

Less encouragingly, the document is poisoned by the Hierarchy of Provision and the dead hand of anti-cyclist John Franklin can also be seen: 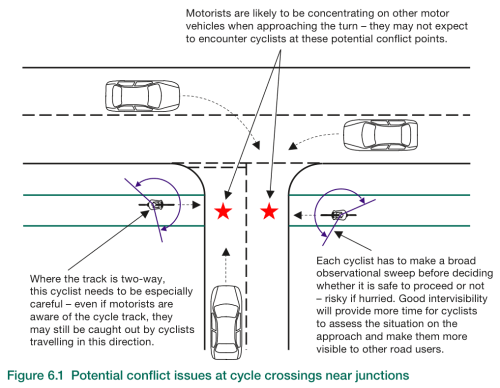 THIS IS NOT HOW THE DUTCH DESIGN CYCLE PATHS AT JUNCTIONS, OKAY? THIS IS NOT WHAT WE’RE ASKING FOR! (Note the similarity to this image from Franklin’s stupid book.)

I’m so sick of seeing this goddamned picture! This is NOT how cycle paths are designed in the Netherlands, and this is NOT what any campaigner in the UK is asking for. This design is so out of date it’s irrelevant. Why even mention it? Does the NHS IT department write about the poor keyboard on the ZX81? No, of course not, it’s a very old design which isn’t relevant today.

The simplest and most obvious answer is that the DfT have taken advice from Franklin’s zombie army of vehicular cycling fundamentalists somewhere along the line, and his 25-year misinformation campaign chalks up another successful infiltration into government policy. It really disappoints me that the DfT can’t think up any solutions to the problems shown in the diagram above. They really couldn’t envisage anything else, other than a cycle track giving way to cars at a minor junction?

I’m not going to go into the document in great detail (and not just because I haven’t read all of it yet) but there’s lots of good advice for UK road planners (such as don’t put signs in the middle of the cycle path – now there’s an idea!) and some not-so-good advice (a bizarre semi-separate cycle path), but the biggest problem is that it’s all just a list of suggestions for councils who might be putting some bike paths in. There’s no actual requirement to install any of this stuff, flawed or not.

I know of a huge road widening project (sorry, “quality bus corridor“) that has recently been completed in Leeds (A65 Kirkstall Road, the section beside Yorkshire Television studios). The road is a major artery from the city centre to the northwest, and it was single lane in each direction until the recent works, although there has always been room to widen it. (You can see the widening in progress here – the original road is still in use at the southern end, which gives you an idea of the scale of the job.) There is now a bus lane and two general lanes on each side of the road – a major upgrade which took months, requiring street lights and drains and utilities to be moved. And what provision is there for cycling? None.

Well, almost none. There’s a bus-and-bike lane, which is very wide – the intention being that bike riders overtake stopped buses, and buses overtake bike riders between stops. This stupid leapfrogging is dangerous and stressful, it’s certainly not an attractive cycling environment. (Sorry, “provision for cyclists to use the new bus lane and enjoy a safer and easier ride.” Who wrote this crap?) There’s plenty of space there for cycle paths, and if they’d been installed when the road was redesigned then we’d have got them for free, or very nearly, as the extra cost involved would have been peanuts compared to the costs of the whole project. But now the work is done, Norman Baker has proudly cut the ribbon on more car-centric infrastructure, and another opportunity to improve conditions for bike riding has been missed.

(Does anyone really believe it is desirabe to mix bikes and buses, or is it just a cheap get-out?)

Until there is a legal requirement to install cycle facilities, it will fall to local campaigners to push for changes – and for local councils to ignore them. We need change from the top, the DfT or Number 10 must legislate installation of quality cycle routes. 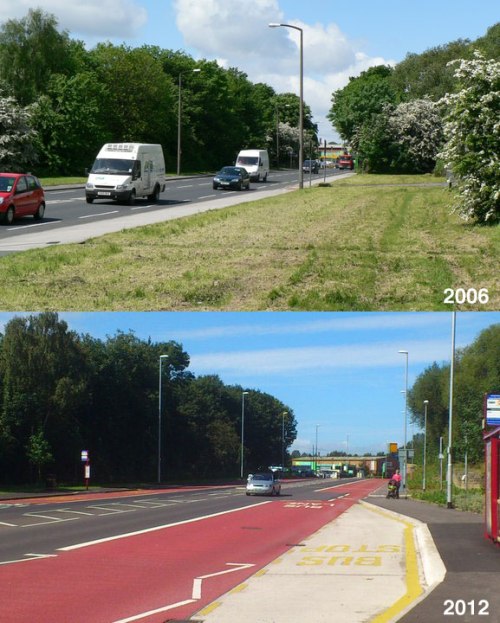 This is further along Kirkstall Road, where there’s only two lanes each way, but the message is the same: an expensive road widening scheme offers nothing for cyclists. We could have got the infrastructure for little extra cost if it was included in the widening scheme. (Photos by Rich Tea, from Geograph.)

Footnote: While we’re on the subject, does anyone want to own up to being responsible for TfL’s Cycle Superhighways being on-carriageway? They say they consulted cyclists and were told that they wanted to remain on the road, which gave them the perfect excuse to install nothing but blue paint. Would anyone like to confess to this?

Also, this topic is also covered on As Easy As Riding A Bike.