This article was originally published here on my new German-language blog. It was written in response to the German government’s hateful helmet promotion campaign, but still contains points relevant elsewhere.

The safest country in the world for cycling is the Netherlands. There you’ll also find the widest spectrum of people cycling: from young children (the average age at which children begin to cycle independently is about 8 years old) to elderly people (those over 65 cycle for over 25% of journeys).

So, the Netherlands is the safest country for cycling at any age, yet helmet use is only 0.5% – and it’s likely that the 1-in-200 helmet-wearing cyclists are riding for sport. Cycling safety is clearly something more than wearing a styrofoam hat – and yet the German government’s ministry for transport is gung-ho for helmets.

All ages and physical abilities, cycling without helmets – yet the safest in the world.

Helmets are no answer to dangers on the street. In the UK wearing a helmet when cycling is common, yet cycling there is six times more dangerous than in the Netherlands (and that figure ignores the fact that hardly any children or elderly people cycle in the UK).

If we genuinely want to make cycling safer, more helmets aren’t the solution. They are really a good indicator that the streets aren’t safe. When people don’t feel safe when cycling, they will wear a helmet – and hi-vis vest – with or without advertising. 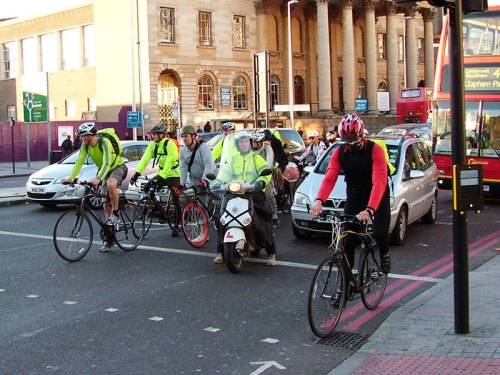 Cyclists in London, where helmets and hi-vis are the norm, not because of advertising but because people don’t feel that cycling is safe.

Higher helmet use shouldn’t be a goal, it should be seen as a failure of policy, an embarrassing statistic. An increase in helmets is a sign that the government has failed miserably in their duty to provide safe streets.

The real solution is better infrastructure. The government must invest in cycling infrastructure, so that everyone can feel safe and comfortable cycling at any time, without difficulty fear. Helmet promotion campaigns are a way for the government to avoid their responsibilities.

On main roads we need wide, smooth cycleways, with good visibility at junctions, optimised for safety (not the narrow, bumpy cycleways with dangerously-planned junctions which are usual in Germany).

In residential streets we need filtering, so that driving through those streets as a rat-run is impossible, but residents and visitors still have access.

Filtering turns a rat-run into a quiet street. (Photo: CEoGB)

Long-term planning goals should be to unravel routes (1, 2, 3), to separate cycles and motor vehicles as much as possible. Cycling infrastructure should be a high priority for transport planners and local councils. Because when the conditions are right, cycling will be the easiest and most obvious way for people to travel through the city.

Helmet promotion is just an easy way for the government to absolve themselves of any responsibility for safety, by pushing it onto the people themselves. They’re saying “if you get hurt, you’ve only yourself to blame” – rather than accepting responsibility for their poorly-designed roads.