This isn’t a Cycle Safety Fund, this is Space for Motoring

This is part two in a series of three posts about the Bedford turbo roundabout and the funding behind it (AKA “Turbogate”). You’ll find part one here, and part three here.

So what have we learned since Tuesday’s article about Bedford council spending £300,000 of Cycle Safety Fund money installing a design intended to speed motor traffic?

Well, David Hembrow got in touch with Sustrans to ask what the hell they were thinking to support such a scheme. Their reply was mealy-mouthed but also illuminating.

Paul Hilton of Sustrans is essentially saying “don’t blame us, we only recommended spending £300,000 on a turbo-roundabout.” But he did point the finger at various other individuals who apparently share responsibility for this decision.

You can read the full exchange here, in the comments of yesterday’s post.

This is the John Franklin who wrote, amongst other things, that:

That’s right: a man who believes that you’re safest cycling while surrounded by cars, vans and lorries is making decisions about how to spend millions of pounds of Cycle Safety Fund money.

I was surprised at this because he is Cyclenation’s representative on that board, and I’d previously been told that John Franklin didn’t have anything to do with Cyclenation these days beyond looking after their website.

I mentioned this on Twitter and then the following short but hilarious conversation took place between Cyclenation and Mark Treasure:

Oh, that guy? He just speaks on our behalf when deciding where millions of pounds of taxpayers’ money will be spent. Apart from that, there’s no connection.

As Cyclenation is not just one body but a federation of local cycling campaigns across the country, it really does need to explain the reason for this bizarre situation to its members.

For a group which is a leading part of the national roll-out of the Space for Cycling campaign, it makes no sense to give such a position of influence (and thus power) to someone who believes that the only place for cycling is on the road mixed up with the cars and lorries.

Other members on the Cycle Safety Stakeholder Group include Chris Peck of CTC, Tony Russell of Sustrans, Ruth Jackson of British Cycling, Ralph Smyth of Campaign to Protect Rural England, and Robert Semple of TfL.

Now I don’t know the views of everyone on this panel – I have no idea of Ralph Smyth’s stand on urban roundabouts, nor whether Robert Semple gets involved in decisions about places outside London – but I would suggest that members of CTC, Sustrans and British Cycling should contact these bodies and demand to know what their decision was, and their reasoning for it. (Indeed, it seems some CTC members understandably feel this way already.)

Update: Chris Peck of CTC has written an article explaining his side of the story. I think it was written before this one was published, as he refers to Patrick Lingwood’s explanation as if it’s a good one (see below). I appreciate that the whole funding situation is far from ideal, but I’m still not convinced that they took the best course of action by approving such projects. At least Chris Peck has taken the time to respond, however flawed it may be – but there has been word as yet from Cyclenation or British Cycling.

Out With The Old Rubbish, In With The New Rubbish

The more I find out about this turbo roundabout scheme, the less sense it makes that cycling organisations should support it.

One of the architects of this scheme, Patrick Lingwood, Cycling Officer for Bedford Borough Council, defended the turbo-roundabout on Mark Wagenbuur’s blog last year.

His main justification for it seems to be that what is currently there is awful, which he spends a lot of time explaining in detail. This may well be the case, but it’s irrelevant as nobody is suggesting that current layout is great. We’re criticising this specific new design, not defending the existing layout, so trying to re-frame the debate to be about old versus new is distracting and false.

He sounds like a dedicated believer in the supremacy of Vehicular Cycling, just like John Franklin and John Forester. His language is typical of those who see “cyclists” as some special breed which excludes most of the population. He believes in the failed “dual network” concept of providing for two classes of cyclist. He clearly sees his job as being to cater for the few existing cyclists rather than provide safe cycling transport conditions that everybody could use.

For someone who is a cycling officer, he has designed a scheme which increases motor vehicle capacity at this junction by 40%. Rather than create something which is suitable for all users, this is a design which only the confident few can use efficiently, and which will be slow and awkward for others. He’s taken a Dutch concept which is intended to speed large volumes of motor vehicles on trunk roads (and which cycle routes are intended to bypass altogether) and has applied it to an urban location with high pedestrian flows.

And the cycling lobby has waved it through in your name.

Finally, for now, it seems that this isn’t the only dubious project that Cycle Safety Fund money has been spent on. Cycling campaigner Alex Ingram has begun to compile a spreadsheet of Cycle Safety Grants so we can see where the money has gone.

A bargain at only £8750 per cycle symbol painted on the road.

It seems that all a council planner has to do is drop a few cycle symbols into their latest design (or simply claim there’s something “Dutch” about it) and Sustrans will recommend that money intended for cycling will pay for your motor-centric scheme.

As Private Eye would say, trebles all round!

Bedford Borough Council traffic department, you are a bunch of cretins

This is part one in a series of three posts about the Bedford turbo roundabout and the funding behind it (AKA “Turbogate”). You’ll find part two here, and part three here.

I have one word to say to the people who chose to spend cycling infrastructure money on a “turbo” roundabout – resign.

Please, resign now, and let somebody who knows what they’re doing take your job. For the good of those who live in the areas you control, leave and never go back.

That might sound like an extreme thing to say, but I cannot comprehend how anybody with even the most miniscule knowledge of Dutch traffic design can describe a turbo roundabout as “a significant improvement in cycling provision.”

Neither option shows those responsible in a favourable light.

(I’m sure that not everyone at Bedford Borough Council traffic department is responsible for this, so this is only aimed at those who made the decision to install this thing. The rest of you aren’t cretins. If you had to work on this under pressure from your bosses, this isn’t aimed at you.)

(If you want to know more about turbo roundabouts and why they’re not cycling infrastructure, then read these excellent posts: “Turbo Roundabouts: Be Careful What You Wish For” and “When ‘Going Dutch’ Doesn’t Mean What You Think It Means” by David Hembrow, and “A Modern Amsterdam Roundabout” by Mark Wagenbuur, also inspired by this dreadful decision.)

Secondly, this design which benefits motor vehicles is being paid for with £300,000 of money from the Department for Transport’s Cycle Safety Fund.

That’s so insane that I can hardly believe it. It’s like the Church of England investing in arms manufacturers. It’s completely inappropriate and goes against the whole spirit of everything that money is meant for.

In a further bout of insanity, Sustrans – fucking Sustrans, the sustainable transport charity! – are actually supporting this thing (see this Word DOC) making bold claims that turbo roundabouts in the Netherlands “function like compact roundabouts, where cyclists take primary position in the lane”. What the hell, Sustrans? This is blatantly untrue, and you’ve used it to get £300k from a cycling safety fund. What’s next – are you going to suggest that London’s 1960s Ringways urban motorway scheme is implemented as shared space?

And all this at one of the busiest junctions in the borough! 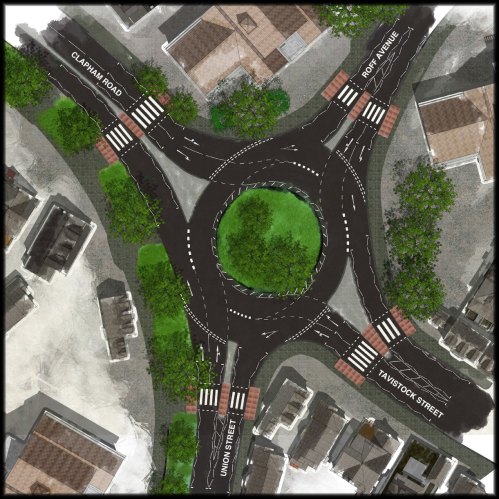 The clue is in the name, you jerks!

The worst thing is that they’re hyping this scheme as being good for cycling, yet go on to say that “cyclists will also have the option of using new shared paths around the roundabout leading to zebra crossings” (see this PDF).

If the turbo roundabout is so great for cycling, why would they need to install a shared-use footpath alongside it? (Also, what good are zebra crossings to someone riding a bike, which they cannot legally use without dismounting?)

What we have here is another case of the disastrous “dual network” concept, a proven failure. So the roundabout is meant for fast, confident cyclists taking the lane in front of lorries, and anybody not willing to do this can meander slowly along the footpath getting frowned at by people on foot. What we end up with is infrastructure which is no good for anyone.

They claim “Studies and experience in other countries have shown that this type of junction can improve pedestrians and cyclist provision while also reducing potential safety issues.” But if there is such a study, they have not provided a link or reference to it. I’d love to see these studies, especially with regard to people cycling on the roundabout, as that is not how it is done in the Netherlands, the world leader in mass cycling.

And yet they can’t come up with any convincing reason why a turbo roundabout is safer for cycling on than a regular roundabout, except the claim that “cyclists will find it easier to cycle through the roundabout due to the reduction in vehicles making last minute lane changes” which is rather weak, to say the least.

And anyway, if a driver really wants to change lanes where they shouldn’t, it’s still entirely possible. Look at the diagram. Imagine you’re in the straight-on lane and want to go right. It’s perfectly possible to cut across where you shouldn’t.

I also note that they’ve mis-typed the DfT’s Cycle Safety Fund as the Cyclist Safety Fund. I reckon this is a Freudian slip, which shows that rather than thinking about designs which the whole population can use to cycle on, they are thinking about the needs of the few “keen cyclists” who are the only ones brave enough to cycling in the UK right now.

This whole way of thinking is a throw-back to the past. It ignores the massive benefits that everyone from every section of society would gain if our roads were designed so that anyone could use a bike as a fast, direct and efficient mode of transport, as they do in the Netherlands.

So while this new roundabout might slightly improve conditions for existing cyclists, the idea that Bedford’s design is good for cycling is absolute nonsense.

Will Bedford’s new £300,000 cycling roundabout enable people like this to cycle?

Bedford, it’s not too late to stop this and design something suitable. The work has not started. Do not spend £300,000 of taxpayers’ money on this.

I’d also request that you stop cynically dressing up motor-centric designs as being good for cycling. If motor vehicle throughput is your main concern, just admit it.

But most of all, please resign, for the good of the nation. Quit your job now, as you clearly are either 1960s motor-centric relics, dedicated vehicular keen cyclists who can’t comprehend ‘normal’ people riding bikes, or clueless incompetents.

PS, added at 3pm: If you want an example of the real thinking behind this project, look no further than the new sign that Bedford wants to install at the zebra crossings: 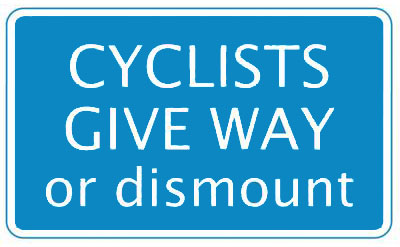 This, apparently, is how Bedford council chooses to encourage cycling.