I’m not joking here, I want some answers.

Recently my own dear council, Lambeth, voted through a “momentous document” which has already been praised as “terrific” by Andrew Gilligan and “fantastic” by the Lambeth Cyclists.

But walking and cycling have been the high priority for Lambeth Council for AT LEAST 11 YEARS, yet the streets remain curiously car-centric! Surely this terrific and fantastic document won’t turn out to be nothing more than wasted ink? So I pointed Lambeth Council to my last post which gives an example of the sort of thing they need to be looking at if they’re planning on being true to their word.

Lambeth Council’s ‘Road User Hierarchy’ in 2002. With the possible exception of emergency vehicles, this entire list is an inversion of reality in Lambeth, and I have the concrete and asphalt to prove it.

The council, minds on other more important matters, failed to respond but I did get two replies.

The first was from London Green Cycles which said: “they’ve just agreed to offer free cargobike trials for businesses.” Now I make no comment whatsoever about London Green Cycles as a business, but I genuinely fail to see how offering cargo-bike trials to local companies will get more children cycling to school (for example). Why, it’s almost as if the council hasn’t got a clue what it’s doing! (Hint: install the infrastructure, which we’ve known about for decades, and businesses will be queuing up to buy cargo-bikes.)

The second reply was from Lambeth Cyclists, a group with whom I have had only fleeting contact. (Speaking about the LCC, one of their members said to me “I don’t like all this focus on Go Dutch,” as if Dutch infrastructure is some silly nonsense and can we please get back to doing bike breakfasts and handing out free hi-vis.)

Quite apart from the fact that CS5 is a TfL project not a Lambeth Council one, the latest plans for Oval junction are dangerous crap, nothing but the sort of paint job Boris’ vision assured us had been consigned to history. TfL are promising that the paint job will only be temporary, a stop-gap until something better can be installed in 2015, which is just far enough in the future that everyone will have forgotten about it when it’s finally cancelled due to budget cuts. (You’ll have to forgive me for being cynical, but the Internet’s memory isn’t as short as most cycling campaigners, it seems.)

So Lambeth Cyclists are offering a vague and distant scheme from TfL as evidence that Lambeth Council takes its goals seriously? Maybe whoever sent that tweet would be better off moving to Crapburgh, they’d fit right in there.

So, what concrete changes have Lambeth Council promised so far? What plans are they consulting on which prioritise walking and cycling and push private cars to the bottom of the transport pile? I genuinely want to see them. I really want this to happen. But I suspect that it won’t.

Will Lambeth Council make me happy and prove me wrong, or will they just offer me a free cargo-bike trial instead?

TfL must surely be running out of options now

What changes will Transport for London make at the Aldgate East junction, where Philippine De Gerin-Ricard was killed just over one week ago?

What changes will be made at Holborn, where another person was killed by a lorry today?

There’s only one thing left to do: Bite the bullet and do what the Dutch did.

Boris Johnson was re-elected as Mayor over one year ago now and has been the “cycling Mayor” for five years, yet progress has been glacial over this time. Is London significantly better for cycling than it was five years ago? The appointment of Andrew Gilligan as part-time Cycling Commissioner has moved things on a bit, as he seems to be eager to do good things and prevent bad things from happening.

But despite all the fine words, there have still been few firm plans, let alone any concrete changes on the ground (though the CS2 extension was due to be started a few weeks ago, I don’t know if it has yet). I’d settle for some plastic changes – and by that I mean trials of new road layouts.

One of the many things Andrew Gilligan said at the LCC seminar in April (three months ago already!) was that he’d like to trial removing a lane here, adding a cycle track there, by using temporary measures. I’d really like to see this happen now. Set up some bollards and some temporary lights, let’s see how a separate green phase for bikes affects things.

We’ll almost certainly discover that it works just fine, as Leicester did.

All hail the Mayor (of Leicester)!

Earlier this year, Leicester Mayor Sir Peter Soulsby closed one lane of Newarke Street to see what effect it would have on congestion. (See local news articles before, at the start, during, and after the experiment.) Despite Newarke Street being a busy thoroughfare and part of the city’s inner ring road, the council wanted to see if some of the three-lane one-way carriageway could be reclaimed for walking and cycling. After a four-month trial, they concluded that the road worked just fine with two lanes, and the extra lane will be used to extend the footpath and install “a separate cycle lane, surfaced in red asphalt” – aah, bliss! I can’t wait to see it (don’t mess this up, Leicester!).

So that’s how easy it is. But you know what? I reckon Leicester could have gone one step further and instead of coning off the lane to all vehicles they could have created a temporary cycle path to see whether more people chose to cycle along there when protected from motor traffic. Sturdy plastic and concrete barriers are available, which would remove the risk of a motor vehicle driver careering through a row of flimsy cones.

Put the roads on a diet

There’s plenty of space to try this on our over-wide highways. Look at Holborn, the location of today’s corporate manslaughter: 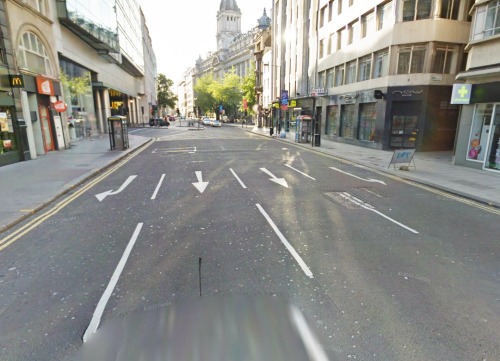 Andrew Gilligan recently told us that we can’t expect change overnight. In his case I guess that’s fair enough, it’s a part-time position and he’s only been in the job a few months.

But what about Boris Johnson? He’s had five years to sort this out and yet has spectacularly failed to do so. Most of London’s roads are no-go areas for cycling as far as I’m concerned. (And millions of other Londoners feel the same way – 30% of people would like to cycle but don’t, and the main reason is fear of motor traffic.)

Boris and TfL: it’s time to stop talking and start taking space from our bloated roads, because without doing that London will remain a dangerous smog-filled mess.

Update: Of course, it’s not just TfL who need to up their game, but the local London councils too. Most roads (even a large chunk of the ‘main’ roads) are controlled by the councils, not TfL. So this post is really aimed at them too, just as much.