CS2 from Bow to Stratford: Never Mind the Quality, Feel the Width (Part 1)

This was going to be one long piece about the new section of Cycle Superhighway 2 in east London, but I realised what a large task it is to cover all the weak points. So this is part one, you can read part two here.

I really want to be complimentary about TfL’s new flagship cycling facility on Stratford High Street, so I’ll start with the good stuff:

So that’s the good stuff over with. I’m afraid to say that TfL’s highwaymen still have a lot of lessons to learn.

Before I start banging on about all the juicy detail, I’d just like to point out that the route is around one mile long, and not the two miles which has been widely quoted by the BBC.

I don’t know where the idea originated that it’s two miles from Bow roundabout to Stratford – presumably a TfL press release has been stretching the truth by counting each side of the carriageway as a separate length.

It may sound pedantic, but Leeds and London are 200 miles apart. That does not mean the M1 motorway is 400 miles long. It’s 200 miles long. Each carriageway forms part of the same road. So the new bit of CS2 is one mile long, or around 1500 metres. (Credit goes to bikemapper for spotting that sleight of hand.)

The new CS2 is not what we have been campaigning for, is it?

So if the width is good, what’s bad? Well, nearly every detail of it is substandard, scoring from ‘less than ideal’ to ‘crap’.

Let’s start at the beginning.

Heading east from the deadly Bow roundabout (which I didn’t even attempt to use, by the way) the kerb-protected section doesn’t even start immediately. There’s a tiny bit of footpath-level cycle path round the edge of the roundabout but then it drops down to road level and runs for the first 300 metres or so as a mere painted cycle lane.

Here, this “Superhighway” crosses several side-roads and driveways, and there’s lots of construction traffic turning across the blue cycle lane. Large, fast, heavy vehicles pass within a few feet of you. 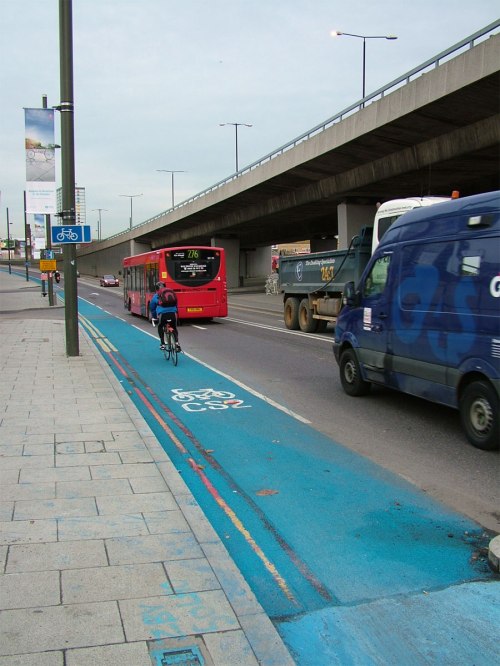 The footpath-level cycle path turns into a painted cycle lane. Note where the HGV tyre marks have already covered over the blue at the junctions within a day or two of it being painted.

Soon we come up against our first bus stop, but as the segregating kerb hasn’t started yet (despite there being acres of space) it’s an old-fashioned one. The bus stop marking hadn’t been laid when I visited, but it was clear from the very narrow strip of blue paint that cyclists are expected to overtake stopped buses with no room for error whatsoever. 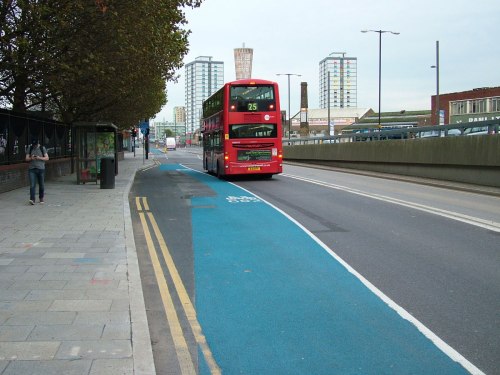 Very disappointing. Imagine there’s another bus in this photo, stopped in the non-blue area on the left. That tiny gap is the “Superhighway.”

This would be a poor bus stop design even by 1990s standards. What the hell are TfL thinking installing this here, in 2013?

No cycle lane at all would be better than this, as the installed lane encourages riders to squeeze around stopped buses. And should a cyclist choose to ride further out, it will cause annoyance to drivers who are ignorant of why a cyclist isn’t using the “Superhighway” provided.

It’s very important to get them right, but TfL have just resorted to painted cycle lanes rather than doing the job properly. Let’s have a look at one:

This isn’t what we’ve been campaigning for. Sure, cyclists have priority, but do you really trust London’s drivers not to left-hook here?

Anybody cycling along CS2 here needs the neck of an owl to pass this junction safely. Not only must they look behind to the right to make sure there’s no left-turning motor vehicles approaching from the rear, but a look forward-left is also required to check for vehicles emerging from the side road.

The segregating barrier finishes just below the bottom of the photo, so the only separation is white lines. Drivers turning left can then take a relaxed line towards the junction by drifting over into the cycle lane so they don’t have to slow down as much. Stratford High Street is a very fast road (and I saw no speed cameras) so some drivers will take this corner dangerously.

I expect that when driving along this fast road there is pressure on drivers to keep their speed up, so slowing down to take this corner safely – or stopping in the road to wait for cyclists to clear the junction – will not be a comfortable manoeuvre.

Why does the physical separation end so far back? Do TfL want to encourage dangerous corner-cutting by drivers here?

A far safer solution here would be to take the cycle path gently away from the road and for it to rise up to footpath height, so that anybody cycling across the side road here will be meeting turning cars at a right angle, which is much easier than the cars coming from behind. If motor vehicles have to mount a hump, and the corner radius is tight enough, then they will have to slow down and turn the corner at a much slower speed also. 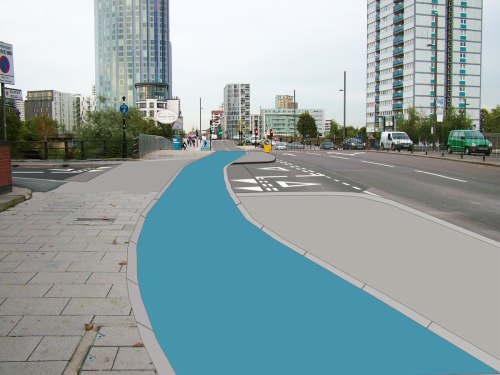 Something like this would be much safer. Turning cars have somewhere to wait until the cycle path is clear, and the tighter corner radius and hump enforces slower speeds.

Making Stratford High Street 30mph and installing some speed cameras to enforce it would also help matters, as drivers turning off the main road wouldn’t feel pressure to take the corner at speed to keep the carriageway clear.

Bust-up at the bus stop

Another poor detail is the bus stop bypasses. They are a compromised example of the concept.

On approaching the bus stop, the cycle path veers sharply away from the carriageway and narrows to as little as 1.5 metres. Due to the ridiculous decision to use 13cm-high vertical kerbs rather than the approximately 30º-angled, forgiving “splay” kerbs, this narrow channel (or “gully” if you prefer) feels a little uncomfortable.

Also, due to TfL’s decision to keep the cycle path mainly at carriageway level rather than halfway between carriageway and footway level, the pedestrian crossing humps can be rather too sharp and steep, though this does vary from hump to hump. (There’s not much consistency along the route, except for the shade of Barclays-approved blue.)

The cycle track width reduces from around 2m wide to 1.5m wide.

TfL have designed the bus stops this way to encourage lower speeds and force single-file cycling throughout them. I can understand why they’ve done this – there’s a lot of jerks who ride bikes in London, and we don’t want them hitting people crossing to or from the bus stop island.

But then there are a lot of jerks driving cars in London too, but TfL seem reluctant to apply the same logic to them, even though they can (and do) cause much more damage.

For some reason TfL are perfectly happy to let jerks drive two abreast at pedestrian crossings, but not cycle two abreast. I don’t understand why cycling gets stricter treatment than driving where there’s potential conflict with people on foot, but this isn’t the first time I’ve seen this (note the humps in the cycle track here, but complete absence of traffic calming on the parallel carriageway).

You may also notice the brown stripe along the blue paint in the photo above, which shows that the sharp bend doesn’t actually do the job of slowing cyclists down anyway – it’s possible to take the curve at speed.

*I say “generally of a good width” because it varies quite a lot along its length. I measured several points along the Stratford-bound side and the narrowest bit I found was a mere 1.3m where it narrows to accommodate a traffic light pole (though it is at footpath level so there are no kerbs, at least). The general width is usually at least 1.9m give or take a few centimetres and at the Stratford end it widens, bizarrely but luxuriously, to over 3m.

END OF PART ONE…

Coming up in part two (or three):

36 responses to “CS2 from Bow to Stratford: Never Mind the Quality, Feel the Width (Part 1)”