It seems to me that one of the keys to successful cycling infrastructure is getting the detail right. Not everything has to be a massive gesture or huge engineering. Among the many things which impressed me on my recent visit to the Netherlands is how minor junctions are often handled.

The footpath outside your front door, however, probably only circles the block of buildings in which you live. To get to the next path, you have to cross over part of the uninterrupted network of tarmac which covers the land.

This is so innate, so built-in to our way of thinking, that it goes unquestioned. Of course the roads are connected, or you can’t drive from one to the other! But it doesn’t have to be this way, as I discovered on the first night of a recent trip to the Netherlands. It’s such a small thing, such a simple thing that it’s hardly worthy of the word ‘engineering’ and yet the subliminal message it sends to road users is massive.

(This might well have been covered already by David Hembrow – it seems that most Dutch road innovations have! – but I can’t find it if it has.)

First, some diagrams. Here’s how we treat junctions in the UK: 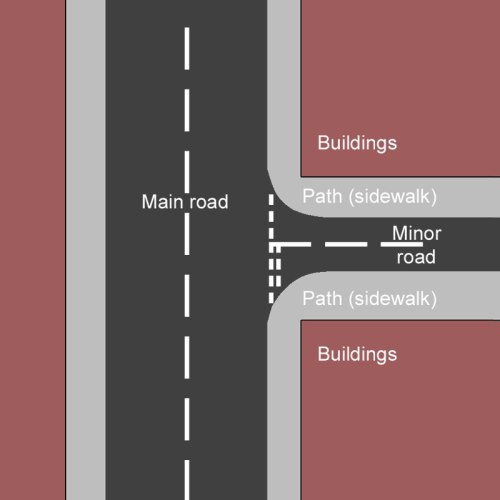 I’m not an expert diagram-maker, but I think you’ll all recognise this as a standard UK road junction.

And here’s how we discovered similar junctions to be in the Netherlands: 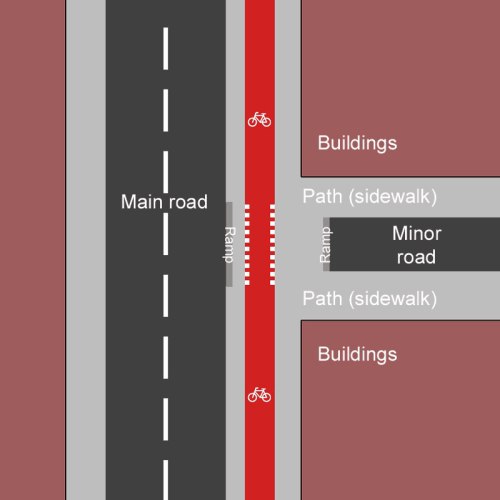 A diagram of the kind of thing we saw in the Netherlands. Again, it’s simplified and not to scale, etc., but it gives you an idea of what I’m talking about.

And here’s some photos of what I call “continuous path”, firstly from a bike rider’s point of view: 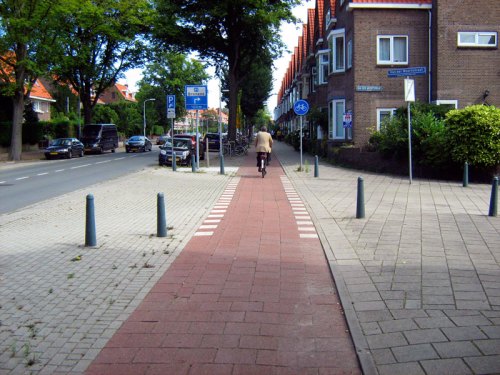 There’s little doubt who has right of way from this point of view. The white squares make riders aware that there’s a potential hazard at that section.

And from the point of view of a driver or rider on the minor road: 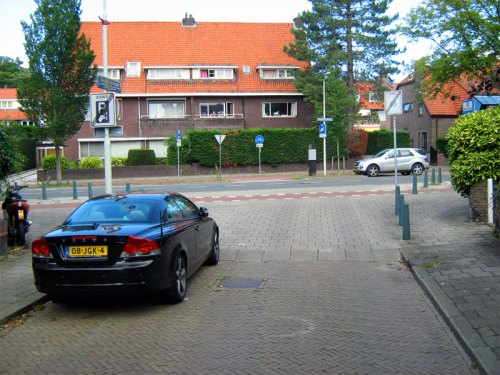 To a driver leaving the minor road, it’s clear that they do not have priority here, as they have to drive up a ramp and over the cycle- and foot-paths to access the main road.

It’s not entirely clear from that photo, but leaving or joining the side road means driving up a ramp, over the path and back down again. Here’s a close-up of one: 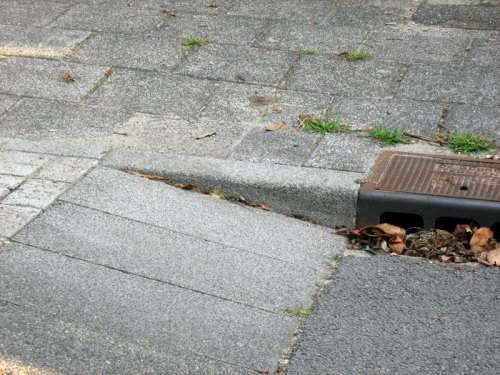 It slows cars down, and subconsciously tells drivers that they are no longer on the road, but crossing a footpath.

I didn’t get a photo from the view a driver on the main road would have, but you can have a look for yourself on Google StreetView here. Here’s a photo of a similar junction at a different location, where again it’s clear that priority lies with people on the cycle path or footpath: 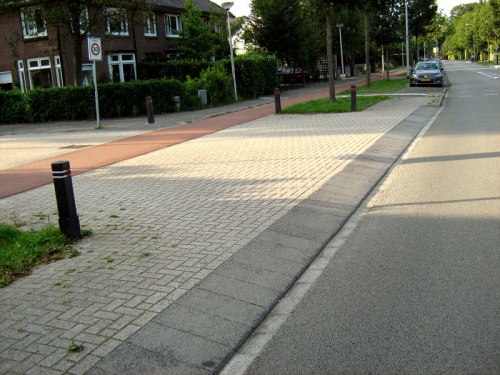 A different location, view from the road. It’s clear that you can’t just sweep around the corner like in the UK.

I think the design here has a psychological effect, and the clues are all on the floor. Having to drive up a ramp onto the level of the path, and the path surface looking and feeling different to the road surface and continuing across the junction, makes it clear that people walking and riding here have priority and that a motor vehicle is a temporary guest passing through a non-car domain.

Compare this with the British way of doing things. Firstly, at most junctions the road takes priority and the path is severed: 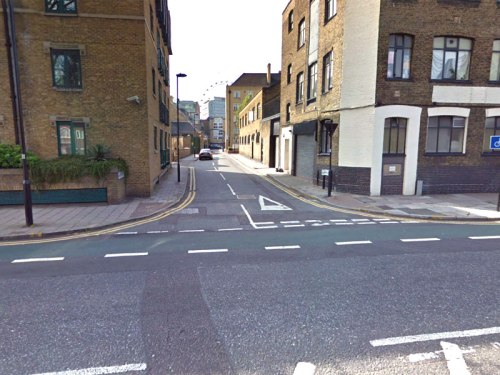 A very similar junction in London. Cars clearly have priority here, the wide corners of the junction mean that you barely have to slow when turning. (Image from Google StreetView, click photo to view on there.)

At some junctions in the UK there has been an attempt to implement the “continuous path” style by adding a hump, but as usual they seem to have got the detail wrong: 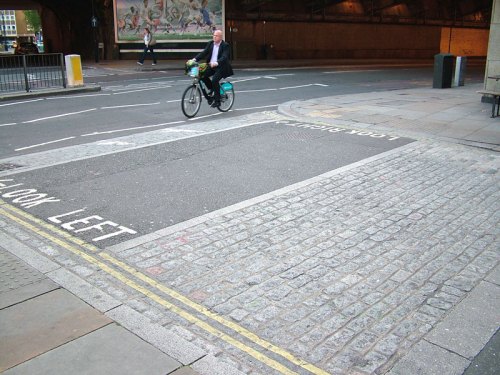 A UK attempt at a similar concept.

Clearly, the road continues around the junction here, despite the change in level. There’s tactile paving, “look left” and “look right” markings, double yellow lines continue around the corner. Pedestrians stop for vehicles here, not the other way around. You can have a look for yourself here, and there’s plenty of other examples about.

Not every junction in the Netherlands has this type of “continuous path” but we found it to be common. It’s a great way to show priority, and to slow vehicles down. We never had any problems with this type of junction, vehicles would always wait for people on bikes or on foot to clear the junction before crossing.

Of course, in the UK, cars turning into a road should give way to pedestrians who are already crossing, but in practice this never happens. It’s another example of the perfect fantasy world populated with reasonable, logical automatons that the Highway Code is set in. In reality, the pedestrian either retreats or runs across the road so the turning vehicle doesn’t have to slow down or stop. The stakes are simply too high for pedestrians to enforce this rule, and most people I’ve asked have never even heard of it.

Implementing this kind of junction in the UK would be physically easy – there’s really nothing special going on here, engineering-wise. However, getting the DfT to approve such a simple measure could take years…*

Mark Wagenbuur of BicycleDutch makes it clear in a comment what I didn’t in the article: that the break in the road also helps signal to drivers that they’re changing road type, from a faster road into a slow residential area.

And Paul James covered this type of junction on Pedestrianise London back in February. I knew I’d seen it somewhere before!

I’m wondering now if the DfT would even need to approve such a thing here in the UK. Surely there could be a short “pedestrian zone, except for access” at the end of a street, thereby creating the same effect within current UK regulations? Sure, it might be a bit sign-heavy (there would need to be ‘pedestrian zone starts’ and ‘pedestrian zone ends’ signs at each end) but still do-able I reckon.